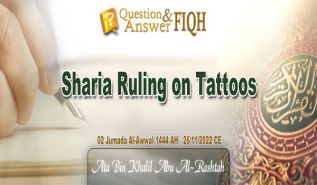 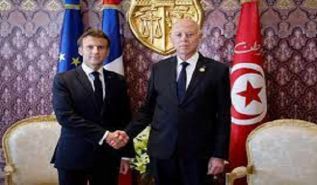 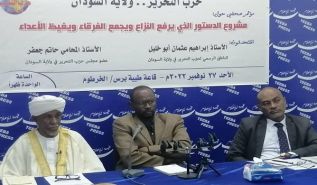 Wilayah Sudan: Press Conference, Presentation of the Draft Constitution that Resolves Dispute, Brings Parties together, and Infuriates the Enemies

A delegation from Hizb ut Tahrir / Wilayah of Sudan in the leadership of Ustaadh Nasser Ridha, Head of the Central Communications Committee of Hizb ut Tahrir in the Wilayah of Sudan, accompanied by Ust. Abdullah Hussein, Coordinator of the Central Communications Committee, Abdul Qadir Abdul Rahman, member of the Communications Committee, Al-Nazir Mukhtar, Shariq Yusef Al-Barbari, and Ahmed Bahr, and Rahmah Al-Mawla Hajj, and Adam Omar, members of Hizb ut Tahrir, visit Sheikh Al-Reeh Ibn Sheikh Abdullah in his mastery in Taybeh Sheikh Abdul Baqi on the island, Wednesday, 21/9/2022. The meeting dealt with the political situation in the country, the state of deterioration and conflict, and the conflict of initiatives presented by parties and rejected by others, under the influence of foreign embassies, reveals the state of conflict between the political parties, civilians and military, which is fuelled by the embassies of America, Britain, Saudi Arabia and the UAE, and that everything that is taking place does not represent the issues of the people of the country.

The solution is for the people of the country to gather based on their Islamic creed, and that Islam alone is the one that unites the people of Sudan and has effective solutions to all issues and problems. The Islamic system is represented in the Khilafah (Caliphate), and the challenge facing the colonial project led by the embassies in the country is the establishment of the Khilafah (Caliphate). At the end of the meeting, Sheikh Al-Reeh thanked the delegation of Hizb ut Tahrir for this visit, this noble conversation carrying the concerns of the people of Sudan. He said: We heard good words, and he emphasized that they are like a carpet with the issues of the people of the country and that their solution should be in accordance with the Book and the Sunnah. Alhamdulilah Rab Alameen, it was a good meeting, and the people of Sujada met the delegation of Hizb ut Tahrir with warmth, appreciation and honour, may Allah reward them with good.

The Head of the Communications Committee presented Sheikh Al-Reeh with the draft constitution for the Islamic State, the book, The Refutation of Western Capitalist Thought, and a number of issues from Ar-Raya Newspaper.

More in this category: « In Light of the Humiliation of the Rulers of Sudan, the American Ambassador is Acting as the General Ruler of Sudan Invitation to Attend and Participate in the Ummah’s Affairs Forum: The Interim Constitution and the Harbingers of a Settlement »