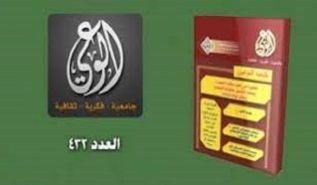 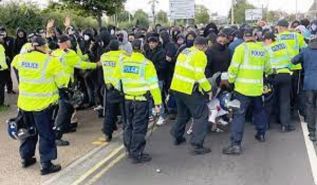 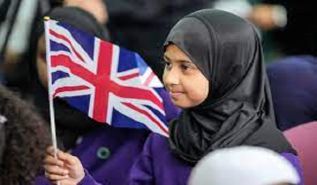 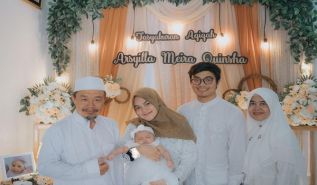 The Crimes of the Jewish Entity will not be Stopped by Mediation, Negotiations, or International Institutions
Rather, by the Muslim Armies’ Mobilization to Destroy what they had Taken over with Total Destruction
(Translated)

The aggression of the Jewish entity against the Islamic Ummah is still continuing and growing day by day, enriched with American support, Arab normalization and security coordination with a treacherous Palestinian Authority (PA). Al-Aqsa Mosque is stormed and the settlers desecrate it, and they continue to kill and destroy with every arrogance and insolence under the hearing and sight of the whole world in a live and direct broadcast. The shedding of Muslim blood has become the title of events, and their bodies are the reservoir of targets for missiles and planes. These are the policies of the enemies of Islam; igniting fires, waging wars and bringing destruction to Muslim lands, until the spilling of our pure blood became points in the record of their rulers' achievements, and a form of electoral propaganda coloured by the blood of Muslims. US President Obama strengthened his electoral campaign by killing Sheikh Osama bin Laden, may Allah (swt) have mercy on him, and for Biden to strengthen his chances and the chances of his party in the midterm elections, he killed Sheikh Ayman al-Zawahiri, may Allah (swt) have mercy on him. This is what the leaders of the monstrous entity are doing now; they shed our blood and desecrate the Masra (site of Isra) of our Messenger (saw), so that with their crimes they will raise their ratings, for our blood is the measure that raises them among their people!

The crimes of the “wretched” continue with their continued presence on the Blessed Land. Their presence is the major crime, rather the mother of crimes and their source, and the crime of assassinating al-Ja’bari and his brothers was preceded by countless crimes. Their aggression towards Palestine and its people and its Al-Aqsa does not stop.

As for the group of puppet rulers, it is a group that is treacherous to Allah, His Messenger, Muslims and their blood. They are not moved by the zeal of protecting Islam or the pride of men, they are nothing more than tools for betrayal. Their role in every crime committed by our enemies is to contain its repercussions and tighten their grip on Muslims to keep them shackled and drink humiliation. Their mission after every crime is washing the blood and containing the consequences, out of their concern for the Jewish entity, which they care for as they are concerned for themselves. They are villainous rulers, but rather slaves to our enemies, who only have the ability to carry out the orders of their masters in Washington and London, and their role has become known and repeated after every crime committed by the Jewish entity; the partner's role in silence, coverage, conspiracy and security coordination.

O Our People in the Blessed Land: the crimes of the Jewish entity do not stop, and Muslim rulers are complicit with the occupation in its crimes, their media fanfare will not protect your blood and your Aqsa, and this applies to the rulers of Iran, Egypt, Qatar...etc. All of them are equal in crime.

The issue of Palestine is based on Islam, and its liberation is the responsibility of the Islamic Ummah and its armies. For this reason, direct your call to your Ummah so that Salah al-Din may rise in it. We say to the Factions and the Mujahideen: Direct your call to your Ummah and its armies and sever your ties with the criminal rulers, for Islam and the Islamic Ummah are the natural base for the cause of Palestine and its people, and it is not permissible to rely on treasonous regimes, rely on them, or trust them, for they have proven with every aggression against the Ummah and its sanctities that they are in the camp of our enemies, and that their role has gone beyond betrayal to conspiracy. The mediation and calming moves that are taking place now by the Qatari and Egyptian regimes, or the claims to reduce escalation launched by the Palestinian Authority and the regime in Jordan are moves filled with betrayal as well as a conspiracy. We warn the people of Palestine and the Mujahideen of these rulers who are not concerned with the blood of the people of Palestine in anything. They are only concerned with seeking to contain the people and to prevent them from jihad in the way of Allah, and are concerned for the interest and security of the Jewish entity; this is their role, which has become the norm in the face of every crime committed by our enemies.

It is political suicide to go to the United Nations and its institutions or to beg the so-called international community, for these are the sponsor and supporter of the Jewish entity and its crimes. The international institutions are nothing more than tools used by the major criminals “the major powers” ​​in carrying out their crimes against Muslims.

Therefore, every voice does not address the Islamic Ummah and its armies, or begs its enemy to protect it from its enemy; it is a reprehensible voice, whose purpose is to divert attention from the right, authentic side capable of liberation, and to distract from the effective and moving discourse, which is the discourse that revives in the Islamic Ummah its faith. The responsibility of liberating the Blessed Land is on the necks of the officers of the Egyptian, Jordanian, Pakistani and Turkish army; it is on the necks of the officers and soldiers of the Muslims in all Muslim countries; they are the owners of the cause, and leaving them and excluding them from the discourse and then going to America and international institutions is a great betrayal… beyond betrayal.

O Muslims: Throughout history, Bait Al-Maqdis has been the cause that unites the Islamic Ummah. It gathers its strength and overcomes its weakness by it, defeating its enemy. On its land it defeated the Crusaders and defeated the Mongols. The Islamic Ummah today is able to uproot the usurping Jewish entity from its roots, and to deter those behind it; rather, it can repel aggression of everyone who thinks of attacking it. The weakness that occurred in it is temporary due to the betrayal of its rulers who are keen to make you appear weak and make you instil this illusion in your sons. The entity of the “wretched” is fragile; their soldiers are not brave to face direct confrontation. If they hear the buzzing of Pakistani and Turkish planes, the roaring of Egyptian tanks, and the rumble of Jordanian artillery, you will find them slain in their places out of fear and terror. So, show Allah (swt) from yourselves what will make you deserving of His victory over you.

O Muslims Armies: We seek your support and address you from the Blessed Land with the words of Allah (swt):

“O you who have believed, what is [the matter] with you that, when you are told to go forth in the cause of Allah, you adhere heavily to the earth? Are you satisfied with the life of this world rather than the Hereafter? But what is the enjoyment of worldly life compared to the Hereafter except a [very] little * If you do not go forth, He will punish you with a painful punishment and will replace you with another people, and you will not harm Him at all. And Allah is over all things competent” [At-Tawba: 38-39]

And, by Allah, you are able to make the Jewish entity history, and repel those behind it from the colonial powers. For your enemy is the most eager for life, and you are eager for martyrdom and the liberation of your Prophet’s Masra (site of Isra). So, do not be misled by the weak justifications, the neglect and plotting of the rulers or their justification of the military power of the Jewish entity, or the international circumstances, for we do not win by the abundance of numbers or weapons, but by the belief of the believers and the determination of the truthful, and our reliance on Al-Qawi Al-Aziz, Who alone brings the victory. So, trust in your Deen and be truthful to Allah, He (swt) will be true to you and support Him (swt) and He (swt) will support you.

And the call of Hizb ut Tahrir to you is the saying of Allah (swt):

“O you who have believed, if you support Allah, He will support you and plant firmly your feet” [Muhammad: 7].

“If Allah should aid you, no one can overcome you; but if He should forsake you, who is there that can aid you after Him? And upon Allah let the believers rely” [Aal-i-Imran: 160].

So, respond to Allah and the Messenger (saw) and move to destroy the thrones of the oppressors and march towards the Blessed Land to liberate it, chanting Tahleel and Takbeer. It is, by He (swt) who raised the heavens without pillars, a call of truth in which is the glory of this world, victory and success in the Hereafter, and a great pleasure from Allah.

Oh Allah, convey this good to the Muslims and their armies from us and open their hearts with and for it. Praise be to Allah, Lord of the worlds.

More in this category: « The Palestinian Authority through its Unjust Decisions Threatens Civil Peace and Seeks to Destroy Society and Impoverish People and Immerse Them in Haram An Open Book to the Bar Association »