America Activities Organized during the Global Campaign, Conquest of Constantinople Glad Tiding was Achieved... to be Followed by Glad Tidings! Indonesia Activities Organized during the Global Campaign, Conquest of Constantinople Glad Tiding was Achieved... to be Followed by Glad Tidings! Sweden: Protest of Support for Our Muslim Brothers in East Turkestan Children Drowning at Sea - Drowned through Nationalist and Capitalist Ideals Pursued by the Politicians! Tanzania: Activities Organized during the Global Campaign, Conquest of Constantinople Glad Tiding was Achieved... to be Followed by Glad Tidings! Tajikistan Activities Organized during the Global Campaign, "Conquest of Constantinople Glad Tiding was Achieved... to be Followed by Glad Tidings!"

Praise be to Allah and peace and blessings be on the Messenger of Allah and upon his family and companions and the one who follows him and his way, and made the Islamic creed the basis of his beliefs, and the Islamic rules as the criteria for his actions and source for his rules…

On this occasion of the blessed Eid ul-Fitr, the Ameer of Hizb ut Tahrir, the eminent scholar Ata Bin Khalil Abu Al-Rashtah, may Allah protect him, congratulates all the people of the noble Islamic Ummah, and he asks Allah Subhanahu to grant us His favour by establishing the righteous Khilafah state (Caliphate) on the method of Prophethood which will implement the Shariah (laws) of Allah on earth and carry Islam as a message of guidance and light, the State of Justice that will liberate the land and bring justice to people; the state of Jihad that will continue the conquests, and people will chant takbirs in their Eids, and conquests: Allah Akbar, Allah Akbar, la ilaha ila Allah, Allah Akbar, Allah Akbar, Wa lilah Alhamd.

It is also my pleasure to relay my congratulations and that of the Head of the Central Media Office of Hizb ut Tahrir and all those working in it to the Ameer of Hizb ut Tahrir, and to all the Muslims for this blessed Eid; this occasion that Allah sent to be a joy to the fasting and a sign of the unity of Muslims, and a reminder for them that they are one Ummah to the exclusion of all people.

I ask Allah (swt) to accept from you and us our fasting and qiyam, rukooh’ and sujood and all the righteous deeds. As I ask Him (swt) to make it return upon the Muslim Ummah in the presence of a righteous and just Khaleefah, who is protected by and fought from behind, and he rules with the Book of Allah and the Sunnah of his Prophet (saw), and that is easy for Allah.

Eid ul Fitr is a favour from Allah Azza Wa Jal upon the Muslims, and the Eid of all Eids is when the promise of Allah (swt) and the glad-tidings of the Messenger of Allah (saw) is accomplished with the victory and authority, and the building of the state that rules with Allah’s laws, the righteous Khilafah state (Caliphate) on the Method of Prophethood.

For this happiness to be complete, we must remove the man-made regimes, puppets of the Kaffir and colonialists the betrayers to Allah, His Messenger and His believers.

For this happiness to be complete, we must combine all energies of the Muslim Ummah.

For this happiness to be complete, the armies must give Nusra (victory) to the sincere working to bring victory of Islam.

For this happiness to be complete, there should be a resumption of the Islamic way of life in all political, economic, social, and educational fields of life.

For this happiness to be complete, the great Islamic structure must be built, that of the second righteous Khilafah on the method of Prophethood.

I invite you to work to accomplish the Eid of all Eids, make the adherence to the laws of Allah (swt) be the conclusion of your Eid, by working with the sincere workers to bring the victory and authority to this Deen and to chant together on the day of victory, the takbeers of the victorious, obedient, praising Allah And asking for his forgiveness.

Eid Mubarak and may Allah accept from you and us the good deeds.

Director of the Central Media Office of Hizb ut Tahrir

More in this category: « Resuming Activity in Al-Okab Forum Another Martyr at the Tyrant’s Hands of Uzbekistan » 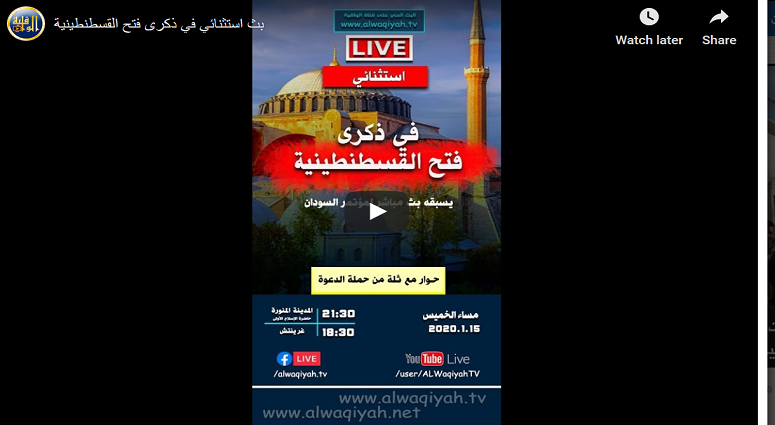