Press Release
Secularism Has Failed Where Islam Will Succeed

Another day another attack on Islam and Muslims. What used to be left to the media is now increasingly being taken on by politicians. The media was unable to scare people away from Islam sufficiently, and they never even tried to put up an intellectual argument for their secularism or against Islam; now it’s the turn of the politicians to divert attention from their wholesale failure to look after the people, lest they turn to Islam in their search for an alternative to miserable capitalist hegemony.

French President Emmanuel Macron yearns for the glorious days of colonialism, when Muslims knew their place (under Western control) and passively accepted the domination of their colonial masters. He misses those days and bemoans the Arab Spring in which the Muslims started to reject the colonisers and demand their independence. He concludes that Islam must be in crisis, if it leads the colonised to reject the domination of the secular coloniser! He forgets that Algeria also rejected French colonisation with its brutality and inhuman methods of torture and subjugation. He forgets that France used Algeria as a nuclear waste dump, and to this day refuses to reveal the secret locations of their radioactive waste. He forgets that anyone with clear sight can see through the false claims of secularism being the glue that holds society together. Secularism is the root of the problem in which the system serves the powerful interests, at the expense of ordinary people. Might is all that matters in a democracy; and the secularists are not even ashamed to say it.

If they knew shame and honour, apologists for secularism like Macron himself should be ashamed of the atrocities that are committed across the world in the name of secularism. If they knew intellect and reason, they should reject the secular ideology outright; for not only is it visibly failing to create any harmony at home, but it has no intellectual foundation. Secularists cannot convince the mind of their belief, so they suppress anyone who stands up to challenge it, then shamelessly brag about their harsh intolerance. For them right is known by might, not proof and evidence. They are no different than the common bully, aware of his inferiority, making everyone else suffer his almighty tantrum and inability to face up to reality.

Islam is not in crisis and never can be. Unlike secularism and democracy, it is not a whimsical fantasy dreamt up by a wealthy elite to subjugate everyone else. Islam was revealed to the Prophet Muhammad (saw) as the last and final message for all humankind. It is known from its two sources: the Qur’an and Sunnah (sayings and actions of the Prophet). It is proven by its intellectual challenge to all people and its agreement with human nature.

Islam’s political aspect gives secular apologists sleepless nights. The life of the Prophet Muhammad (saw) is overtly and obviously political, as he (saw) was engaged with looking after the people’s affairs according to the Revelation. Despite this, Western academics, institutions, politicians and the media spare no expense in their denial of Islam being political, with their shallow attempts to describe “Islamist” thought as a modern innovation and corruption of the essence of Islam.

Islam has complete guidance on how to structure a society in which the needs of all the people are met. Islam is not short-termism in its policies and vision. Islam does not tolerate leaders who measure all decisions according to how popular they appear to the electorate. Such are the current leaders of the major Western powers today, whose criminal handling of the economy, the pandemic and foreign policy has exposed their real concerns, as they leave a trail of death and misery in their wake.

The Khilafah (Caliphate) that the Western elite fear and attempt to besmirch with their false comparisons to their ISIS debacle, will stand as a shield to protect its citizens from colonial aggression. They will no longer be able to enslave most of the world’s people and rape nearly all of its resources. They will no longer be able to ignore the environmental damage their corporations do in their insatiable quest for growth. The world will quickly see the fallacy of the capitalist ideology, its failed economic model and its false secular creed. This is something the selfish elite should rightly fear. But for ordinary people, it is their salvation from secular and colonial oppression.

The Khilafah on the way of Prophethood will return soon, with Allah’s permission. It is the promise of Allah’s Prophet and Messenger (saw) and is what Hizb ut Tahrir works day and night to re-establish. It is founded on principles of guardianship of the rights of everyone, not only the mighty. Right is known by evidence and not whoever wields power. The rulers are truly accountable before the people, and not merely subject to a pseudo accountability at the ballot box. The media is truly independent and not a cartel representing big business interests as it is today in the secular West.

We invite you to register and join Hizb ut Tahrir / Britain for its online international conference: Return of the Islamic World Order.

Speakers will address the following topics:

From Pandemic to BLM: Humanity Desperately Seeking an Alternative

​A New Economics, Not Serving the One Percent

The Khilafah System, Taking Care of the People

Establishing Islam’s Leadership on the Earth and Our Responsibility

More in this category: « Capitalism is Failing on Every Measure: Time for a New Economics Islam is Based on an Enlightened Thought and We Should Accept Nothing Less of Our Leaders » 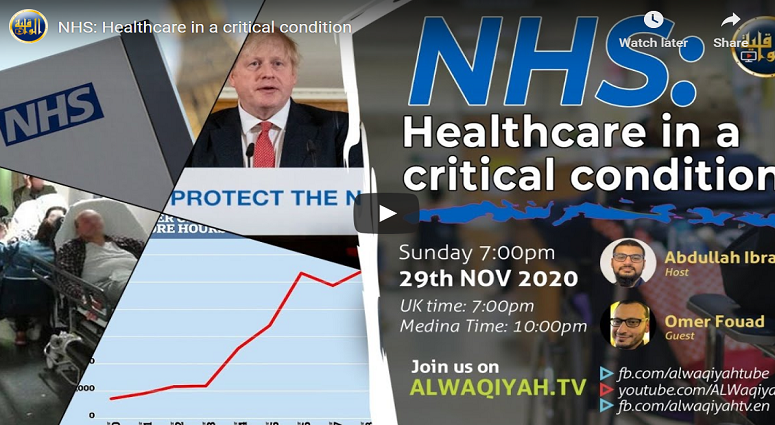