Upon the Centenary of the Destruction of the Khilafah ... O Muslims, Establish It!

For 100 years, the problems in the Muslim lands grow, increase, complexify, and rush towards a fatal ending. The Muslim Ummah and the whole mankind are in dire need of an urgent political change. Politics is the elementary tool in organising human affairs. In other words, politics is the sole means to revive and implement a system that will achieve progress for the human being and societies. Without political change, it is neither possible to find solutions for the human problems nor to implement these solutions in a correct and effective manner, which at the same time pleases Allah (swt), who is the Lord of the Worlds and Al-Maalik-Al-Mulk. Islam defines politics as organising, managing human affairs and guarding their well-being, and made this an obligation upon men and women alike. As Muslim women are an inseparable and vital part of the Ummah, they too sense the troubles in their societies and across the world. They too witness up close the absence of Islam and the oppressions by tyrant regimes. As a matter of course, Muslim women have also a major part to play in the political awakening and revival of the Ummah across the world. However, as Muslim women, we must conduct politics that leads to a fundamental change, in a manner that pleases Allah (swt), and with the awareness that this is an obligatory duty upon us!

We know that the capitalist ideology has no tolerance for a "political Muslim woman profile", who aspires and calls for an Islamic life. This is why we never find the Western capitalist world and their puppet regimes in the Muslim world giving appreciation and compliments, freedom and success, and a voice in media and politics for Muslim women, who work for a fundamental change upon the Islamic method of politics. The Western capitalist powers and their puppet regimes in the Muslim lands do appreciate, and even honour with Nobel Prizes those women, who praise Western political and cultural aims, life styles and values, and who unconditionally glorify, propagate and advocate these as universal values in the Muslim lands. They support them with funds from colonialist institutions like the United Nations in order to conduct projects in the fields of education, women's rights, and fight against poverty and hunger. They establish foundations in the names of women like Pakistani Malala Yousafzai, Irani Shirin Ebadi, and Yemeni Tawakkol Karman, allowing them to talk at major platforms of the Western powers, like the assemblies of the USA and EU, and they present their pictures and so-called heroic struggles on the title pages and covers of the most important media outlets. In exchange, these women present the colonialist Western kuffar powers in the Muslim lands, and their political systems, their democracies and secularism as the liberators of the Muslims. Their entire rhetoric is made up of glorifying capitalist ideas. Pakistan's former Benazir Bhutto pioneered massive corruption and division within the people, and the spread of violence in the country. Bangladesh's Shaikha Hasina's tyrant and self-seeking government pushed poverty in the country to unbearable levels. She enshrines her name in the pages of history through persecution and oppression in response for the political demands of the Muslims and her cruel stance towards Rohingya Muslim refugees. In Turkey, the First Lady and her daughters on top, the head-scarf-wearing AKP parliamentarians and ministers do literally canonize CEDAW, the Beijing Declaration, the Istanbul Convention and the like international agreements. These women advocate gender equality, support the penalizing of young marriages, keep silent to the unjustified imprisonment of thousands of innocent Muslim women, and moreover, they even deny the facts about the torment, torture and humiliation they are subjected to. These women, who embraced the principle that "Laicism is not LA Islam" (meaning that secularism is not denying Islam), follow the footsteps of democracy heroes like Margaret Thatcher, Madeleine Albright, and Hillary Clinton, who signed the killing of millions of children in Iraq, Afghanistan and countless other lands for the sake of their colonial interests. These women do not do politics; they are no true politicians! On the contrary, they are spineless and visionless puppets, who rented out their minds, hearts and tongues to the colonialist Kufr powers! They are miserable persons who lost their dignity in this world and the Hereafter!

This is the reason why none of those democratic political women across the world, in the West and in the Muslim lands, have failed to elevate hunger and poverty, to improve bad health and education standards, or to end wars and conflicts, despite their large numbers in parliaments, ministries, and even in peak positions of the state. Besides that, capitalist democratic politics never intend to solve human problems; it is full of discrepancies in itself. It devours its own principles in order to maintain its colonialist existence. Colonialist capitalist politics entitles itself with rights, and begrudges the Muslims of these rights. Today it calls the headscarf a human right, tomorrow it bans it on absurd reasons. It says that racism contradicts human rights, and sows seeds of racism and nationalism in our lands. It talks about protecting the rights of minorities, and supports directly or indirectly ethnic cleansing in China, Myanmar, Kashmir, India, CAR, Sri Lanka and elsewhere. It makes calls of peace, but supports the killer regime in Syria, and sells weapons to its subcontractors, Saudi Arabia and Iran, to conduct its proxy war and mass killings in Yemen. It speaks of fighting hunger, and seizes the wealth of states through its Sustainable Development Policies, abandoning their people to starvation. The Colonialist West has canonized freedom of expression. Yet, in the awareness of Islam's and the Muslim woman's power, it labels Muslim women and men, and even children, who defend their Islamic values, as dangerous and a threat in its politics and media, and deprives them of all their rights and oppresses them under the title, "fight against terrorism/extremism".

We, as Muslim women, believe (have Iman) that true dignity belongs to Allah the Almighty, His Messenger, Prophet Muhammad Mustafa (saw), and the Believers. We will not become of those who humiliate themselves in this world and the Hereafter through taking part in the oppressions of this colonialist world order, and participating in tyrant politics or through keeping silent! Abu Sa'id (ra) said that the Messenger of Allah (saw) said:

“Let not any one of you belittle himself. They said: O Messenger of Allah, how can any one of us belittle himself? He said: He finds a matter concerning Allah about which he should say something, and he does not say [it], so Allah (mighty and sublime be He) says to him on the Day of Resurrection: What prevented you from saying something about such-and-such and such-and-such? He says: [It was] out of fear of people. Then He says: Rather it is I whom you should more properly fear."[It was related by Ibn Majah with a sound chain of authorities.]

The oppressions and tyranny of the Kufr system cannot scare and prevent us from fulfilling this obligation. On the contrary, they only strengthen us in working with even greater resolution to establish the Islamic system as soon as possible, and in supporting those who work for this noble Dawah with all our efforts, for this is the system that will ensure true dignity and safety to all women. In order to achieve this, we must call all Muslims, in particular those of power among them, to distance themselves from the politics, ideas and values, projects and strategies of capitalism and all man-made systems that are hostile to Islam and Muslim, and to turn back to our creed (Aqeedah), to the rules of the Shariah, and to establish the Second Khilafah Rashidah (rightly guided Caliphate) upon the Method of Prophethood. In order to save the Muslim Ummah, and in order to regain prosperity and peace for mankind through the hands of this noble Ummah, we must hold on to the political method of the Messenger (saw). And we must embrace this political work as the only true method with our heart and soul, and devotedly.

We, the women of Hizb ut Tahrir, are here to support and lead you in carrying out this great and honourable Dawah. So, take our hands.

More in this category: « Trump or Biden: Neither Makes Capitalism Worthy of our Allegiance 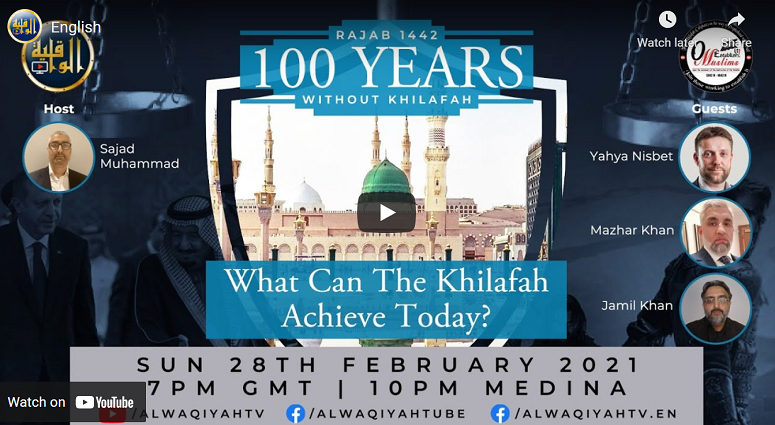