The Muslim is a Guardian and Witness Over Humanity!

“And strive hard in Allah's cause as you OUGHT to strive. He has CHOSEN you, and has not laid upon you in religion any hardship: it is the religion of your father Ibrahim. He has named you Muslims both before and in this (Qur'an), that the Messenger may be a witness over you and you be witnesses over mankind! So, perform the Salah, give the Zakah and hold fast to Allah. He is your Mawla, what an Excellent Mawla and what an Excellent Helper!” [Al-Hajj 22: 78]

Ibn Kathir (RH), the great scholar of Islam, in his Tafsir of this verse says, “(He has chosen you,) means, `O Ummah of Islam, Allah has selected you and chosen you over all other nations, and has favored you and blessed you and honored you with the noblest of Messengers and the noblest of Laws.….Then He mentioned His blessings to this Ummah, whereby He mentioned them and praised them long ago in the Books of the Prophets which were recited to the rabbis and monks.”

Subhaanallah! What a great honour and status that Allah (swt) has bestowed upon this Ummah. But this immense status and blessings are linked to an immense responsibility which Allah (swt) also mentions in this verse – to be “the witnesses over mankind”. He (swt) repeats this great obligation that Muslims have to be the ‘Guardians over humanity’ in another verse, when He (swt) says:

“Thus We have made you the ‘ummatan wasata’ (the just nation), that you be witnesses over mankind and the Messenger (Muhammad) be a witness over you.”[Al-Baqarah: 143] Ibn Kathir in his Tafseer of this verse states that ‘Ummatun Wasata’ means the best and most honoured nation. This is because: firstly, this Ummah will testify on the Day of Judgement to all the other nations of the world – past, present and future – that the Prophet (saw) conveyed the message of Allah (swt) to mankind; and secondly because He (swt) entrusted us as Muslims with the complete legislation, the best Manhaj (way) and clearest Madhab (methodology) in His Qur’an and Sunnah.

Hence, Allah (swt) has entrusted the Muslim Ummah with the Deen of Islam to be the ‘Witnesses to Mankind’ and to deliver its message to humanity. By delivering Islam to mankind, it does not mean just conveying it – but to be the ones who work to make this Deen, this best Manhaj, this best Madhab become the standard of right and wrong in this world, by which humanity organizes its affairs, and the means by which justice is administered to the nations of the world. This requires for Islam to be established in authority and dominance on this earth.

When we witness the scale of chaos, oppression, and suffering in this world today – the mass poverty, the homelessness, the torture and slaughter of innocent civilians and children, the epidemic of crime and racism, the abuse and exploitation of women, broken families, and the moral vacuum within states, and so on – it’s crystal clear that the justice and light of this Deen is needed more than ever in this world!

So, these verses of the Qur’an emphasize that this Ummah has been CHOSEN for the role of leadership and guardianship over humanity, and that it should occupy a central position in this world because it has been assigned a great role by the Creator (swt) in the development of mankind based upon the Deen of Islam. In fact, this role of delivering Islam to humanity is the very purpose for the existence of this Muslim Ummah. We were raised and established by Allah (swt) specifically for this purpose as He (swt) says in Surah Al-i Imran:

“You are the best of the nations raised up for (the benefit of) men; you enjoin what is right and forbid the wrong and believe in Allah.” [Al-i Imran: 110] Hence, Allah (swt) tells us that He raised this Muslim Ummah to take a position of leadership over mankind in order to bring the light and justice of Islam to humanity. And on the Day of Judgement, we will need to give proof to our Rabb (swt) that we did our utmost in word and deed to fulfill this purpose for our existence as Muslims.

But how can Islam take leadership over this world once again as ordered by Allah (swt), and how is it delivered to mankind in the manner expected by Allah (swt)? This cannot be achieved simply by conveying the invitation to Islam within societies as individuals and groups. Rather, it requires a state which will implement fully the complete Islamic legislation that Allah (swt) entrusted this Ummah with, and then will use all the tools in its means to convey the Deen of Haqq and Guidance of Allah (swt) to humanity. We saw this with the life of the Prophet (saw). Before establishing the first Islamic state in Madinah, he (saw) and the Sahaba struggled to deliver the message of Islam to those just within Makkah and surrounding Arab tribes. However, when he became the leader of the state and ruled by Islam, and when his model of governance was subsequently followed by the rule of the Khulafah – we saw how whole nations came under the fold of Islam within a few decades – such that authority of this Deen had spread from Spain to China.

So today, for us as a Muslim Ummah to fulfil the purpose of our existence – to bring the leadership of Islam to mankind, it means working to re-establish this state ruled by Islam alone – which is the KHILAFAH (or the Caliphate) based upon the method of the Prophethood. This mission to establish the rule of Islam and convey the Deen to humanity through it – was the legacy of our beloved Prophet (saw) which was handed down to us as his Ummah by Allah (swt), for as Muslims, we are the inheritors of this noble Deen.

Working to establish the System of Allah (swt) upon this earth is not simply a great responsibility and obligation upon us as Muslims, but a huge opportunity that our Rabb (swt) has placed in our hands. In fact, it is a golden opportunity – an opportunity that was not given to previous Muslim generations of the past, except the generation of the Messenger (saw) – to establish the state ruled by Islam. It is an opportunity for us therefore to be the Beloveds of the Prophet (saw), to be in his company in Jannah for being amongst those who carried the Mission of Allah(swt) to implement His Laws upon this earth that He has entrusted us with.

But to earn this great honour, it requires for us to strive in this mission in the manner that we ought to strive as Allah (swt) says in the first words of Surah Al-Hajj, verse 78 above. It means to struggle in His (swt)’s Cause as much as we owe to our Creator (swt), and to the level that is deserving of the honour He has given us. It requires for us to give from our time and efforts the high importance that it rightfully deserves and to give it a central position in our life.

This means realizing that our lives as Muslims cannot be ordinary lives like that of the disbelievers, just chasing the things of this dunya and focused on the temporary interests of this world – whether it is our studies, jobs, children, families, securing a nice home, our social life or entertainment or leisure, or building a high status for ourselves in society, or pursuing personal ambitions. It cannot be that we make these things - the main priorities or worries in our life that consumes most of our energies and thinking - for these things are the purpose of existence of the disbeliever but not ours as Muslims, for Allah has given us a higher purpose – to be His Shuhada-an-naas – His witnesses for mankind! This means following in the path of great companions of the Prophet (saw) like Musab ibn Umair (ra) who sacrificed a life of comfort, wealth and luxury when he embraced Islam, and became at the forefront of carrying the Islamic dawah. He earnt the honour of spreading the Deen amongst the people of Madinah and preparing the society for the first state ruled by Islam. And indeed, upon his death, the Prophet (saw) recited the following verse:

“Among the believers are men who have been true to what they have pledged to Allah.” [Al-Ahzab: 23].

Similarly, for us to fulfil this great responsibility as the witnesses to mankind by establishing the System of the Allah (swt), the Khilafah, upon this earth, and to earn the great status and rewards bestowed upon those who embrace this honourable mission, it requires for us to also be willing to sacrifice our time, our wealth and our interests for this call. Indeed, Allah(swt) says:

“Verily, Allah has purchased of the believers their lives and their properties. In exchange for that, they will have Paradise.” [At-Taubah: 111].And He (swt) continues in the same verse:

“Who fulfils his covenant better than Allah? Then rejoice in the bargain which you have made, for that is the supreme success.” [At-Taubah: 111].

As a Muslim Ummah, we live in a time of darkness in the absence of the Khilafah. However, we also live in a time where there is a goldrush in terms of opportunity to earn the rewards for fulfilling the mission of carrying the Dawah to establish the Deen of Allah (swt) in authority upon this earth. So, let us not lose this golden opportunity that our Rabb has placed in our hands. The Prophet (saw) said, «إِذَا جَاءَ الْمَوْتُ طَالِبَ الْعِلْمِ وَهُوَ عَلَى هَذِهِ الْحَالِ مَاتَ وَهُوَ شَهِيدٌ»“He whom death overtakes while he is engaged in acquiring knowledge with a view to reviving Islam with the help of it, there will be one degree between him and the prophets in Paradise.” [Al-Tirmidhi]

More in this category: « The Establishment of the Khilafah is a Legal Obligation (Fard) for which we are Accountable to Allah (swt). So, Upon the Centenary of the Destruction of the Khilafah... Establish It, O Muslims! Good Messages of the Return of the Khilafah from the Quran and Sunnah » 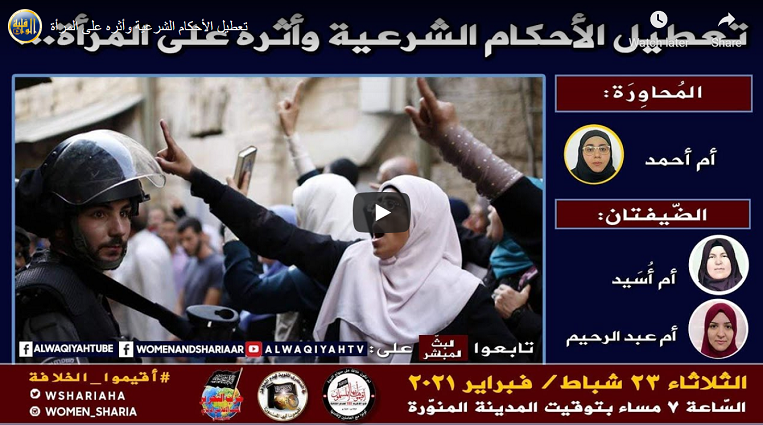 The Character of Being the Best Nation…